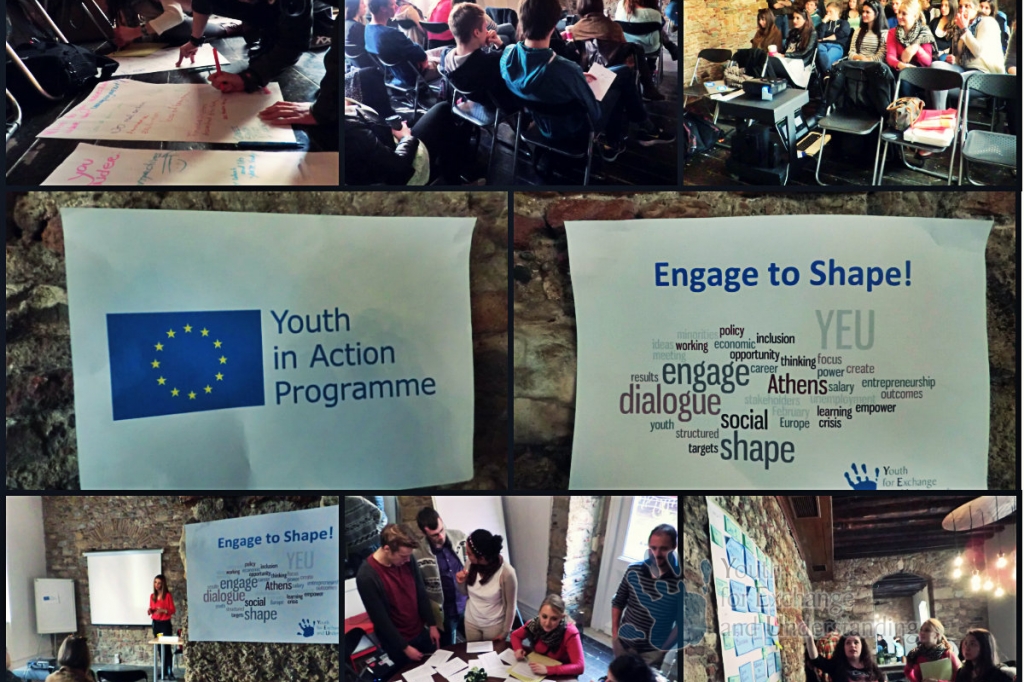 “Engage to shape!” was a 4 day long seminar (or structured dialogue), which was implemented by YEU International and partner organisation NAK Hellas. The project took place in Athens, Greece from the 13th to the 18th of February 2014 and gathered 30 young participants from Belgium, Cyprus, Greece, Italy, Lithuania, Malta, the Netherlands, Poland and Turkey and provided a platform for youth to take an active role as European citizens.

The aim of the seminar was to enable youth to express their solutions with regards to the pressing problems faced by societies as a result of the economic crisis. In addition to this, the project aimed to engage participants in a structured dialogue with Greek policymakers and stakeholders and develop a policy paper about youth social entrepreneurships as a means to combat unemployment and social exclusion.

The seminar not only helped the participants increase their knowledge on concepts such as social entrepreneurship, youth unemployment, social exclusion and EU policy making, but it also resulted in a tangible and concrete outcome which took the form of a list of 19 recommendations structured into three groups: 1) Informing and Encouraging; 2) Empowering, Equipping, Training, Teaching; 3) Funding.

More specifically, the first block of recommendations aimed to increase knowledge of (young) people on social entrepreneurship. In addition, they attempted to stimulate local governments to encourage the starting up of social enterprises. The second block of recommendations targeted mostly the EU and member state governments. One of the most important areas mentioned was the necessity to narrow the gap between the education system and the business sector by equipping people from a young age with competences and skills to eventually succeed in the labour market and social entrepreneurship in particular. Lastly, in order to reach the desired changes mentioned in the recommendations, the EU was seen as the main source of funding in collaboration with other stakeholders such as business angels, private companies and fundraisers.

The list of recommendations provided will hopefully contribute to the solution of the many economic and social challenges that Europe is facing in the 21st century.