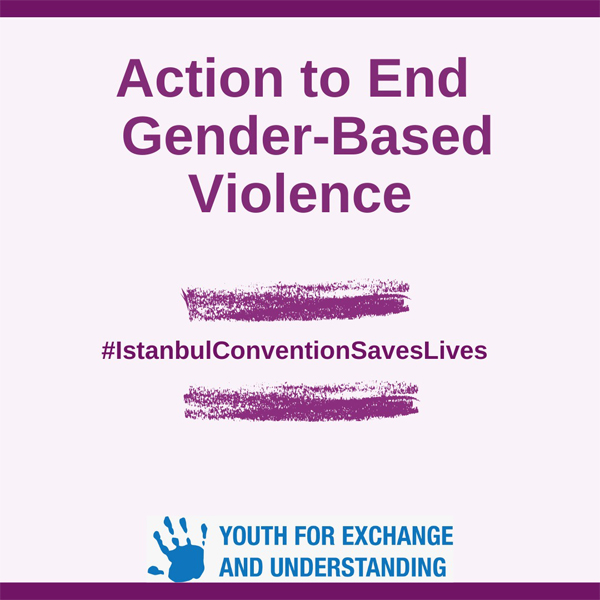 Statement by YEU on Turkey’s withdrawal of the Istanbul Convention

Youth for Exchange and Understanding is expressing deep concerns regarding the Government of the Republic of Turkey’s announcement termination of being a party to the “Council of Europe Convention on Preventing and Combating Violence Against Women and Domestic Violence” mostly known as the “Istanbul Convention.”

The Istanbul Convention was opened for signature on 11th May 2011 in Istanbul, and Turkey was the first member state to ratify the convention in 2012. It also took vital steps to align its national legislation with the accord, including adopting a law on protecting families and preventing violence against women (Law No. 6284). As of March 2021, it has been signed by 45 countries and the European Union; later ratified by 34 countries.

Withdrawing from the Istanbul Convention means reversing the promise given to combat violence against women in the international arena and not recognizing the state’s obligations in combating all kinds of violence and condemning women to violence.

All over the world and in Turkey, combating and preventing violence against women and girls is only possible with policies that aren’t excused by discriminating women, protecting them against violence, holistic and implementing severe punishments against the perpetrators. A country’s culture and traditions must never be used as an excuse for femicides.

Violence against women and girls is among the “most widespread human rights violations” in the world. It is estimated that worldwide one in three women are subjected to physical or sexual violence by an intimate partner, or sexual violence from a non-partner during their lifetime. (Resource: UN agencies). Today, this is more important than ever before, as violence against women and girls has increased globally due to pandemic.

As an international youth organization with more than 30 member organizations from all around Europe and beyond, we would like to express that gender equality is a fundamental matter that we always mainstream through our YEU projects and YEU working groups.

As YEU youth, we appeal to Turkey, where we have two member organizations and other countries who haven’t ratified the convention: #IstanbulConventionSavesLives if it is implemented! We urge youth NGOs to speak out to their decision-makers to continue protecting, promoting all women and girls’ safety and rights, including remaining committed to the full implementation of the #IstanbulConvention.