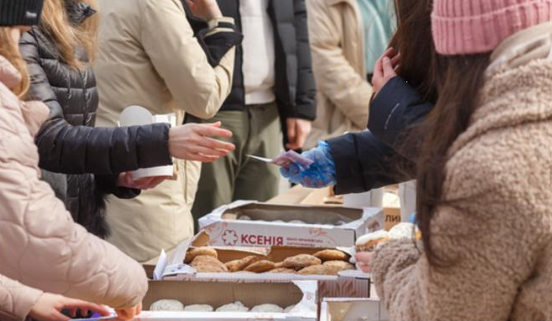 FRI – A charity event in Ivano-Frankivsk for Ukraine

Ukraine has been confronting Russian aggression for more than a month now. Dozens of our cities, including major ones like Kyiv, Kharkiv, Mykolaiv, Sumy and others have been shelled. There were massacres in cities like Bucha and Borodyanka, where lots have been killed and wounded. Hundreds of civilians, including children, are dying every day.

Foundation of Regional Initiatives has paused its regular activities for a while; nevertheless, a lot of members strive to help our country, army and citizens to win our fight for freedom and sovereignty. A charity event held by Ivano-Frankivsk local branch is a perfect example.

FRI members have organized a mini-fair of baked products in Ivano-Frankivsk. Raised money will be given to the Armed Forces of Ukraine. Apart from the pastry made by young people themselves, some confectionery offered by private bakeries of Ivano-Frankivsk was also presented.

“We will transfer money for the local soldiers. The father of one of our members helps the Territorial Defense Forces and also the soldiers who are heading to the frontline. We hope we will have a similar event one more time as this one turned out to be really popular” — stated the members of FRI Ivano-Frankivsk branch. Before that, members of Ivano-Frankivsk local branch had already transferred 90% of their budget money to the Armed Forces of Ukraine.