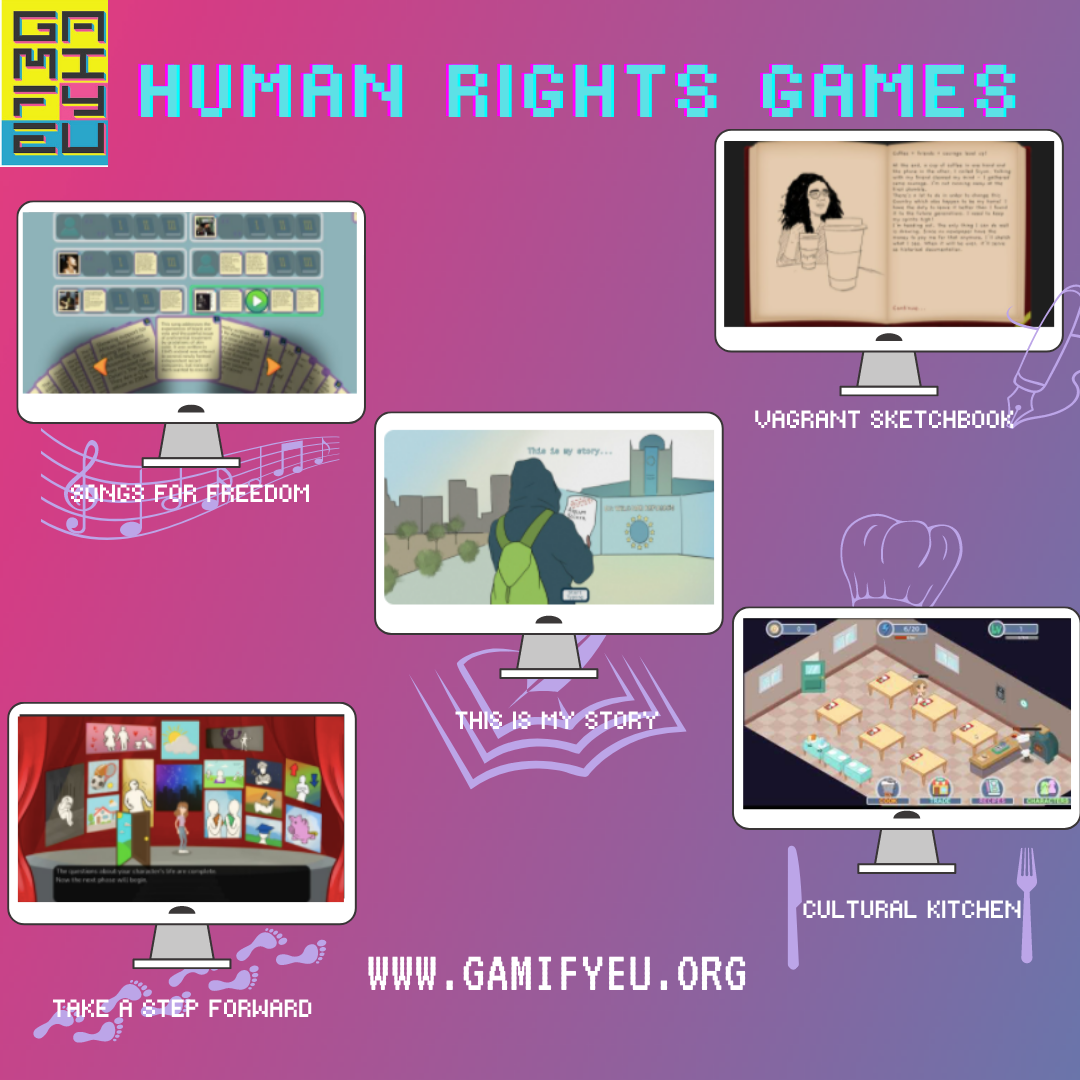 The Stories behind the stories: Check out our new GamifyEU Games

GamifyEU project was a perfect opportunity to step into the world of digitalisation and challenge the thinking that non-formal education needs to be offline. Bringing the European Union and wider Europe to young people across the continent can be challenging. Traveling through time was crucial to understanding how important European Union is, but above all, how important human rights and abilities to exercise them freely are

To experience time travel, play the game called Quizzes in time: EU future, past, present. This game was developed some months before the elections for the European Parliament 2019.

The new EU Youth Strategy 2019-2027 is based on three main pillars –Engage/Connect/Empower – which were the inspiration for the games called Shattered timeline (Engage) where the player gets to know Europe and collects different items through countries; MEP for a month (Connect) in which the player, after the elections becomes a member of the European Parliament and steps into their shoes for a month; Roadtrip for a change (Empower) in which the player learns how to raise one million signatures for their civic initiative and meet decision-makers

These games can be played in English, Spanish, Italian, Estonian, Bulgarian, Portuguese and French.

Songs for Freedom is a minigame inspired by the activity called Fighters for Freedom which can be found in Compass, a publication of the Council of Europe. Instead of learning about the prominent human rights activists, the player is being reminded of songs and artists that changed our societies, one way or another Politics, culture, and history are all entwined and kept together by a substance known as music. Music has told the story of humankind’s journey better than any textbook could ever hope to do so. A lot of songs and tunes are written in a moment, filled with energy and passion and if performed at the right time and the right place, they could be a very powerful tool. Some songs are standing out from the rest and have a deep and profound impact on the society in a way that they changed the course of human history

Take a step forward is an essential non-formal education activity promoting the importance of equality, freedoms and social inclusion and it can be found in Compass publication. This is typically an activity with at least 10 participants, but GamifyEU is bringing a single-player experience with many different characters that come together in the end. Don’t be afraid to step into someone else’s shoes!

Vagrant Sketchbook and This is my story are telling the story of someone that could be any of us. Many lived it and unfortunately, this chapter is not closed. Being a refugee or a migrant means having your world completely upside down with many tough decisions along the way. One is certain – life will never be the same.  These two stories/games are inspired by the storyline developed by the participants and the team of the Hero’s Journey training course YEU implemented in Belgium in 2017 as well as the project called JAMMIN – Joint Artistic Methodologies for Migrants’ inclusion and integration

Cultural Kitchen is based on the strong belief that food brings people together – in this game, the player is running a restaurant with a menu based on traditional dishes from different countries around Europe. The player is the restaurant manager and cooks with great pleasure for their guests. Variety is the spice of life and it brings us together just like the player brings together the ingredients for each traditional dish. All the recipes are accurate and can be tried in a real-life kitchen!

All the games can be played on www gamifyeu org